oh no no. nothing has befall on her. she’s not sick. it’s her monthly physiotherapy and also she had her 1 year orthoptic eye check. 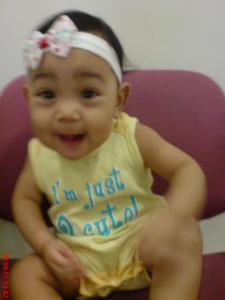 whenever i did the stretches and exercises on her, she would resist so much that both of us would struggle. even when hubby and the babysitter got her to do, it’s as if she’d be going for a war. she’d be wailing, screaming, gagging, twisting, turning and all. *sigh* in the end, the home physiotherapy failed. at that very moment, i felt like smacking her bums. 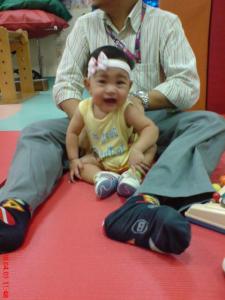 so today’s therapy with Mr Fauzan was a chaotic one. LOL. just at the sight of him, Fateha turned her face and hid under my armpit. oh dear! as soon as she was placed on the mat, her wailing began. and i was sitting just opposite of her, trying to be helpful and calm her down. my ears were trying their very best to hear all those instructions and feedbacks Mr Fauzan was trying to let me know. i could not hear most of what he said haha!

i managed to capture her antics while doing therapy today 🙂

and lastly, her eyes. the orthoptist fell in love with Fateha. saying how cute and cooperative she was. playing some toys to stimulate her visual was definitely, perfectly OK with her. but when it was time for the opthalmologist to check her eyes, her wailing started again. i didn’t manage to snap any pictures or video because i was not allowed inside to see what they were doing. i guess it was to prevent me from fainting while watching them “work” on her.

anyway, the result of the test was good. nothing was wrong with her eyes but Fateha had to come back for a refraction checkup once a year till she’s 5. i’m just hoping for the best.

till the next appointment.