we went to Johor Bahru, saturday afternoon. it’s a new hobby and habit we’ve started since getting a passport for Fateha. our usual port – JusCo shopping centre. we had our late lunch at Kenny Roger’s, to which Hubby said the food tasted better than the one in Malacca. i couldn’t tell, of course. 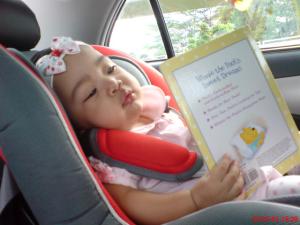 i was forced to read 😦 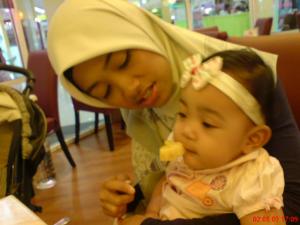 i asked for her BBQ chicken and she gave me a piece of orange!

Hubby wanted to cross over to another shopping mall right beside JusCo, a mini one – Tesco and so we went. that was our first entrance. nothing much, of course but we saw something that caught our eyes! it was a cheetah suit. not for adults (LOL!) but for kids. i fell so in love and bought without hesitation. nope! i had hesitations…on the size. but still, i bought it. because….

she made my heart melt like nobody’s business. haha! and this little cheetah didn’t purr at all. instead, she has started saying some words. she said “nana” it could be meant for “nak” (“want” in malay). she also said “wawa”, could be “Allah” (God). whatever they could mean, i’m just glad she’s starting somewhere.

4 thoughts on “My Little Cheetah”