i shouldn’t call her Nightcrawler. she’s more like Nightroller because that’s just what she’d do to get around. LOL. i fed her at 9pm and sent her to her room to let her sleep, so that i could continue working on the laptop (i had some overdue documents to hand in). 2 hours later, after Hubby came home and i prepared something for him to eat, he took a peek into her room, just to look at her. he missed Fateha a lot on weekdays as he had night classes. poor him but there’s no other option.

so he called out to me to look at her. i was thinking that maybe she looked super duper cute, angel-like, so much serenity because i could melt at the speed of light just by gazing at her sleeping. then when i peered in as quiet as thief, i was aghast! why? 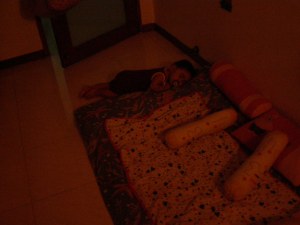 she wasn’t on her mattress. she rolled all the way to the end, so close to the door. sleeping peacefully. i had no choice but to slip away into my room and scoured for the camera. LOL!

one day, when she’s old enough to read and understand, and if this blog still exists, i’m sure she’ll scream at me for exposing her sleeping ritual.

2 thoughts on “The Nightcrawler”