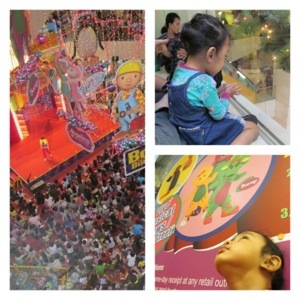 We brought her to United Square to watch Barney and friends, in December 2011, and if Thomas was there it would have been a joy to her. However, when we got there, we were needed to spend $80 to get a ticket to watch the show and a photo session with Barney but we were late. All tickets were sold out. We scurried around the mall to look for a vacant space where we could still watch Barney. Fateha was still happy. 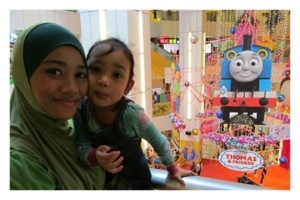 Read a poster that said Thomas would be there in the next round of event, a week after. So happy!!! Wanted to bring her again and we would definitely get the ticket for her. Then Daddy checked his work schedule, only to realize that he was in the morning shift and couldn’t bring us there. Sad, we were.

Thomas advert came out on the telly, an event at the same mall again! It wasn’t a show like last time but a ride on Thomas’ carriage, a photo and craft session. I was sure Fateha would really love it and she was! In fact she was so excited that she couldn’t stop talking about it.

I was so ready to fork out whatever amount just so she could enjoy the ride. There wasn’t a crowd when we reached so I thought it was our luck. But a “fully redeemed” sticker plastered on Thomas’ poster broke our hearts, yet again.

I swear I could burst into tears when she kept asking me if she could go in and take the ride. Umpteen times! I had to disappoint her once more by telling her there were no more tickets. She held on to the barricade and looked solemnly at Thomas, who was making his round with little children inside. I couldn’t contain myself when looking at her like that. I was sure she was thinking “why those kids can ride and I can’t?”

There were a few a dollar kiddy rides somewhere in the mall and I asked if she wanted to ride in them. I was glad that she didn’t mind and obliged. No tantrums, phew!

She was happy but I was sad. Very sad.