Gaah, the school holidays are coming to an end! Why does it always seem to be taking too long for the holidays to arrive and then it passes by so quickly?? It’s not a day or two but it’s a month long holiday! But we managed to squeeze in a four-day road trip to (where else) KL!!! This time, it was a little bit different because we went with 2 extra heads. I mean persons.

(we left the camera at home (duh) and used our handphones instead, hence the poor quality)

And just like our last trip to KL 2 years ago, the hotel’s swimming pool was our first go go go! I didn’t jump in and swim with them. I was just dipping my legs and seated at the pool’s edge, watching them having fun. 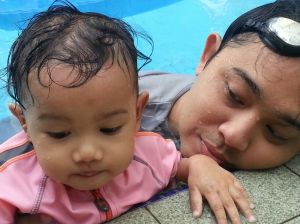 the firstborn had long left her aquaphobia and swam to her heart’s content; she didn’t even wanna leave. the same goes to the littler one who was just as excited as her big sister. i couldn’t help but to laugh each time she tried to “drink” the water but of course we got her to stop and put her back in her boat float.

The next morning, we crossed over to the opposite of our hotel – Berjaya Times Square. Yea we’d been here countless of times before but this time, we weren’t here to shop. We decided to bring the kids to the indoor theme park, which Berjaya Times Square was famous for. We got good rates (don’t ask how) and took most of the kiddy rides together. It was meant for families with small children. I thought I wanted to ride on the roller coaster but when I thought about who’s gonna look after the kids if I was up there, I dropped the idea.

This little kiddo. She chickened out! She was afraid of all the rides. She clung to me, gripped my top, shawl and back of neck, buried her face in my chest and refused to get down. No, she wouldn’t even walk. Loud noises scared her crazy! She would shut her eyes so tight that if I were to pry them open, I would, literally, need a crowbar. Hahah!

But it was a totally different scenario with her big sister. Remember how Fateha was afraid of loud noises and dark caves that some rides would glide into and all that kind of things? That person had gone with the wind!!! Fateha was so much braver this time. I was shocked. And terrified. Worried. And definitely, I feared of the falls that she would have. My mind was corrupting me into thinking that she would get trampled on by those rowdy, impatient kids while on the rides. But she did good, no chickened out! 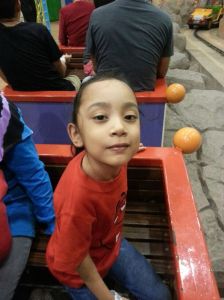 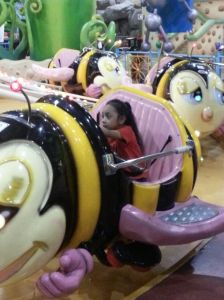 Oh i tell ya, there were kids like that at the theme park. It was a scary sight for  me. And when Fateha wanted to ride on the viking ship (kids’ size), I got even worried but I allowed her, though. Asking me a couple of times if she could to ride it. Seeing her so confident and eager to sit in that ship, I didn’t have the heart to say no. Because the ship was kiddie size, adults were not allowed on it. Dang! I was even more anxious.

I got our helper to manage her onto the seat; the operator was also guiding Fateha in (she wore a “special needs” label) and I waited at the side. The other kids, boy, were they rough. It was a relief that no one accidentally pushed Fateha off the steps or else, the beast in me would have to appear and devour those kids. But they were so impatient when coming down from the viking. Luckily, the operator was there and glared at them. Although that was nothing, but it was something…at least.

The next day, we decided to go to I-City in Shah Alam via a taxi.

This Red Carpet housed what Madame Tussauds famous for – wax figures, but the resemblance of the celebrity wax figures were far from Madame Tussauds’. Prince William should have lesser hair and Marilyn Monroe, oh my goodness, far more pretty. The other figures were okay but I could not agree more with my husband that it was the best in Malaysia. 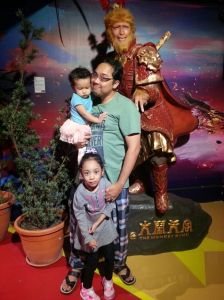 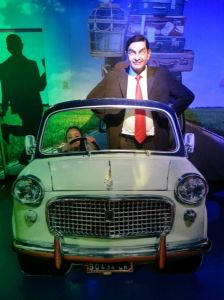 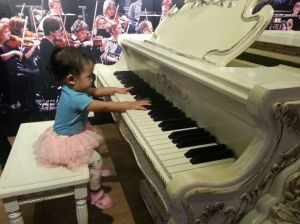 We visited the Haunted House, too. We were all tugging on each other, grabbing everyone’s shirt, with our eye closed. Hubby was leading us through the house hahah. Screaming, jolting and worrying about which figure would jump on us next!

They had Snow Walk (something like Singapore’s Snow City but I haven’t been there)!!! Jackets were free but boots must be rented, if needed and Hubby thought we didn’t need them.

Jackets sizes were crazy. Fateha was wearing an adult sized while Fateena was wearing a size that could fit Fateha better. But they were free, who cares! Once inside, I regretted for not renting a pair of boots. The kids wore covered shoes, it was alright. Hubby and I were on slippers!!! Who in the right mind would wear slippers to walk on ice?

Not only our feet were exposed to the cold, our toes got so chilled that I thought I might be getting frost bites and losing all of them. Everywhere was covered with blocks of ice as well as ice shavings and we almost tripped on our own slippery footwear a number of times! No, I couldn’t take the freezing temperature and found my way outta there, leaving Hubby and Fateha inside.

I-City was alright. I thought it could be better, they should have more wheelchair-friendly entrance or exits, lifts or escalators would be fine too. There were too many staircases and just imagine, if anyone who is wheelchair bound, how are they gonna go down the steps? And the one thing that I thought they should have in placed is a taxi stand, which they lack of. REALLY!!!

I kid you not. We came by a taxi and our driver was asking how were we going back to the hotel? By a taxi, of course, but our driver told us that it would be difficult to get a taxi from I-City. So I expected it to be because of a long queue at the taxi stand or what. But no, it was because there were no taxi stands there. Not even one. We were looking high and low for it under the burning sun. We were sweaty and angry!

And you know, since I-City was built on top of a hill, we had to walk all the way down and out of the area. We walked out onto the busy streets to get a taxi and then we finally got one. Phew! The only thing that we were complaining to each other was that the taxi was very stuffy. The air-con was not working!!! We got more sweaty and the kids passed out (as in slept throughout the journey back to the hotel). No, the driver didn’t even wind down the windows. I wouldn’t mind if he did that cos I missed the feeling of getting my face “beaten” by the rough winds.

Anyway, if anyone planning on going to I-City, do drive there. No taxis or cabs. Just drive!